Trained as a playwright, Manuel, our Italian blogger, has worked as a freelancer from the age of 18, when he created his first theatre company with friends, enabling him to travel and act in the world’s main capital cities. Subsequently, he wrote for magazines on performing arts, music and lifestyles; more recently he worked as a stylist for a large fashion multinational. As everyone who knows him says, he’s incredibly creative, so much so that every so often he changes direction to find new inspiration and motivation.

Even though he is a vegetarian and he has been conscious about his eating from an early age, he only set up the Uno Cookbook blog two years ago, which is currently praised as one of the best on vegetarian and organic cooking in Italy. Thanks to this success, he has already published his first cookbook –which is being promoted as we speak–, consulted with various restaurants in Milan and organised very successful collaborative workshops.

His tough outer appearance hides an attentive, sensitive and very generous person; so much so that invited us to stay as his home for three days when we were in Lombardy.

NOT TO BE MISSED IN MILAN:

This project came out of a big change in my life; it was a rebirth I wanted, all the while considering all the aspects of veganism. For me, plants and animals, even the air, water… and me and you are part of one whole, and that translates as uno in Italian. And my idea was to create a cookbook for everything. I like this name as for me it has a philosophical meaning behind it, but if you don’t know about it, you’re not scared off straight away.

Because I decided to delve deeper into thoughts and reflections I have always thought about. Previously, eating animals was very sporadic, but nowadays it’s normal… and I hate the idea of having to kill so many just to eat when there are so many alternatives.

Also, I’m a great lover of life and I think we have to love animals as we love people. I wonder why we love cats and dogs, but not chickens or cows; what’s the difference? We fight to eliminate differences between human races, but then we are racist with animals…

In addition to this firm personal belief, I respect the decisions of different people completely; my partner isn’t vegan or vegetarian for example, but we don’t have any problems living together. 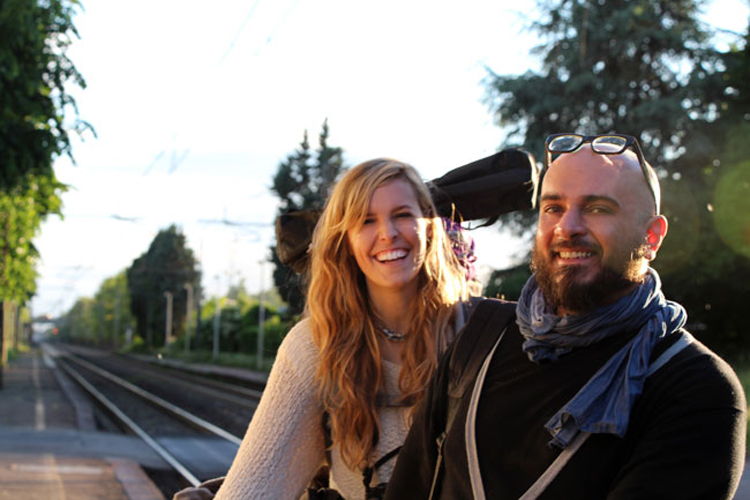 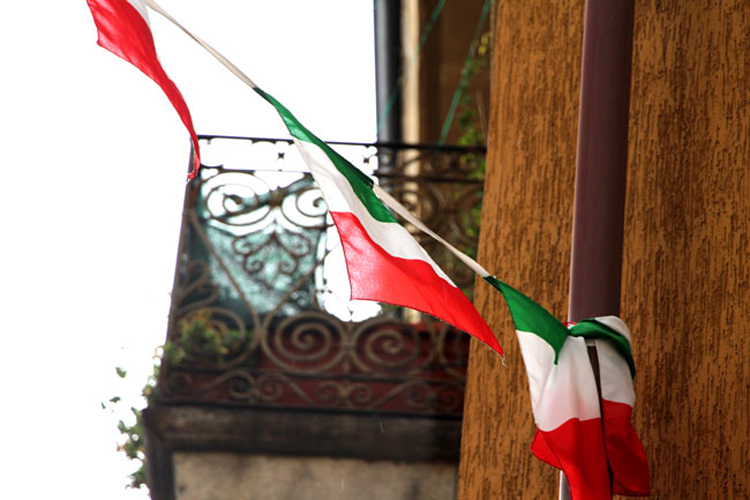 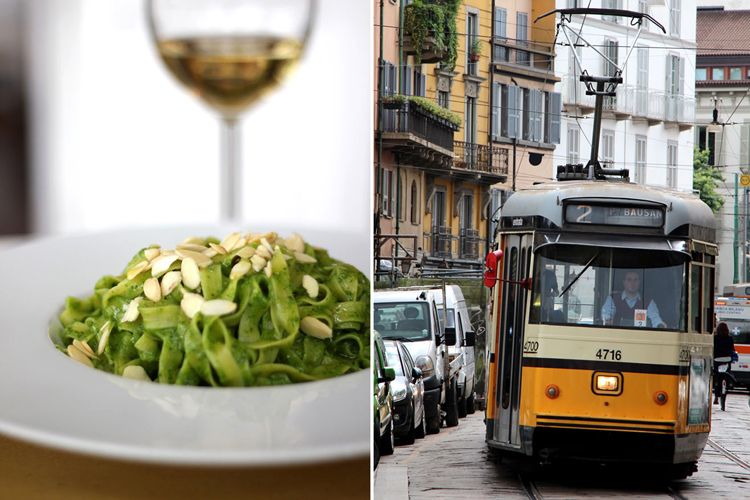 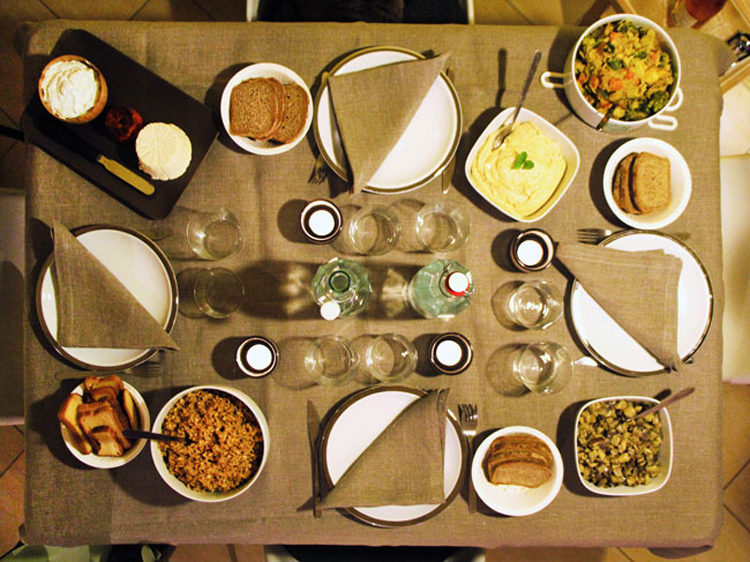 Mainly my experiences. I have never liked the teacher/student methodology, because I prefer to share knowledge from both directions. So I’m inspired by artists, musicians, philosophers or people in my daily life who don’t have to be vegan in any case, but what they do or say makes me think or have experiences that affect me.

Vegan, gourmet, seductive cooking for people who like to cook and who want to spend time cooking.

Exactly, it’s not a fast food blog. They are always simple recipes, not haute cuisine; if you like cooking, you can make them. But you have to respect cooking, you’re doing something with food and you’re investing time to create something for your body, so you can’t be rushed. If you like swimming, you go for a couple of hours two or three times a week, and it’s worth it, isn’t it? So if you like cooking, you also have to give it the time it deserves.

Knowing what you eat. Whatever your diet. If you eat meat, eggs or cheese, you have to know where it comes from, how it has been made and who has made it.

When you go to a film in the cinema, you don’t just choose it because of the title, but because you know the director and the actors; so it should be the same with food: don’t choose pasta and tomato sauce because you like how it sounds and the price, you have to know about the spaghetti, where it comes from, what it is made with, who made it… And the same goes for the tomatoes.

We have to be stricter; when we choose food we have to know about it, we have to delve inside the world of food as it goes inside us.

Lemon, garlic and fines herbes: mint, oregano, basil, rosemary and everything else you can grow in the garden. I can make marinades with these ingredients and cook all kinds of recipes, even desserts. Apricot tart with basil or any recipe with fruits of the forest and mint are superb!

All the edible wild plants and flowers that can be found around you. You can see what we have collected here: dandelions, cornflowers, elderflowers, camomile, nettles… There are a lot more than we think; I’m still amazed by them.

I would also say that any ingredient I don’t know about is interesting to try out. Well, at the start I’m always very respectful; I study it and I’m gentle with it. When we’re friends, then I can use it for this or that, I know it won’t betray me.

Yes, I think that presentation and photography are essential so that whoever visits the blog gets the idea of the dish just by seeing the photo. They don’t have to recreate it exactly, but a good photo will give them a good idea. That’s why I don’t understand recipes without photos; you can’t explain a dish just with words, you need to see it.

Yes, an overhead shot, always using the same dish and the same wood box for the background, taken between 11 and 12 in the morning. 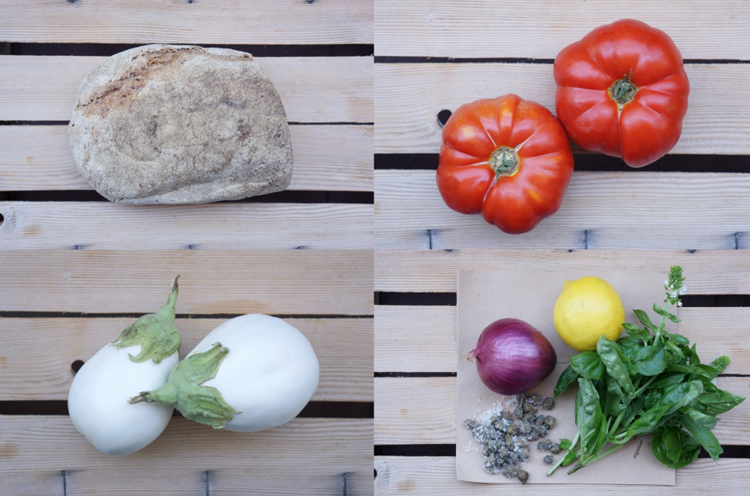 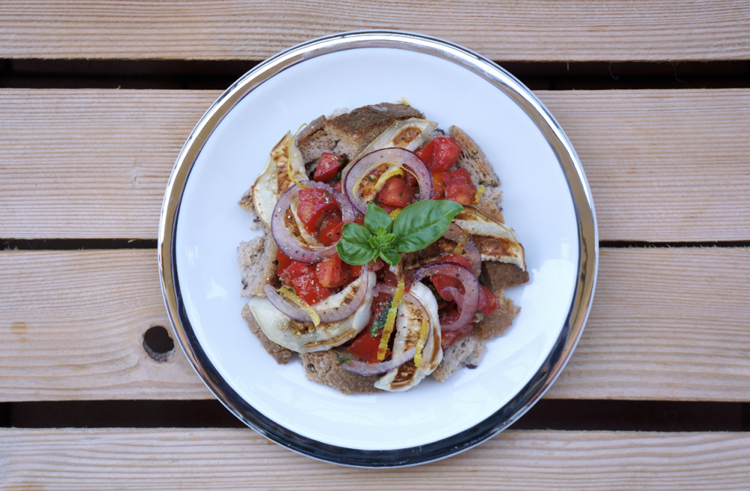 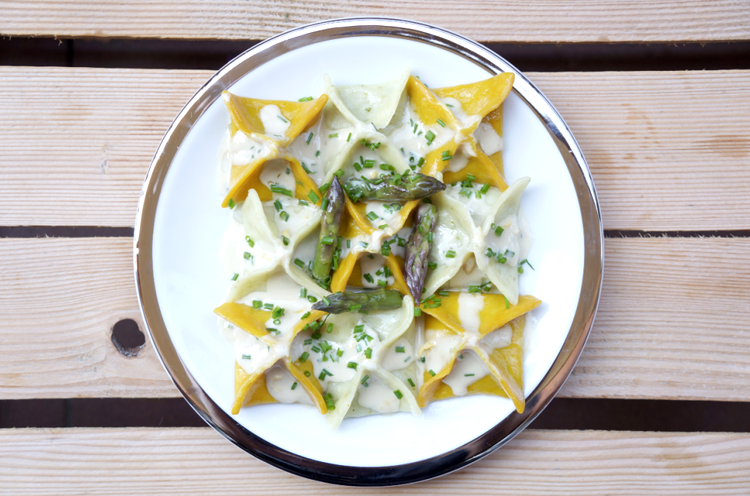 From the very start I believed I needed a personal language when showing my creations. I wanted to make it as simple as possible, deleting everything that wasn’t necessary and only show off the food. I want all the feelings and seduction to come exclusively from the food and not the surroundings. It’s a bit like pornography: I show the dish completely naked without any complications.

At the moment it’s my life project, I invest all my energy into it; the intention is to learn about food, cooking and health by experimenting, sharing and exchanging opinions with my followers. 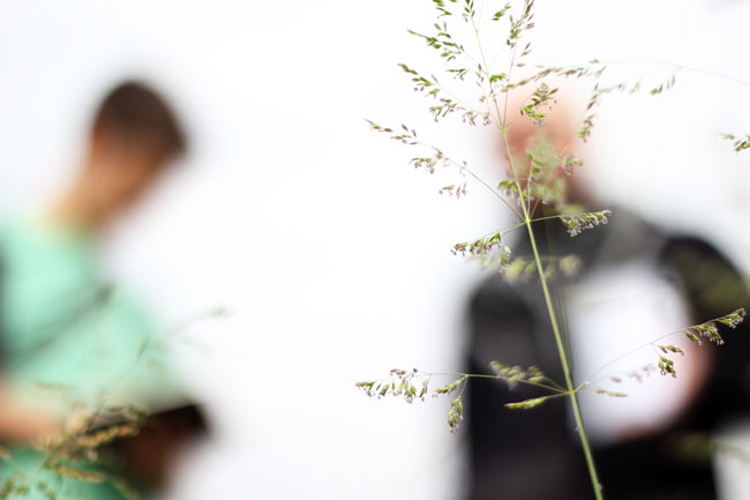 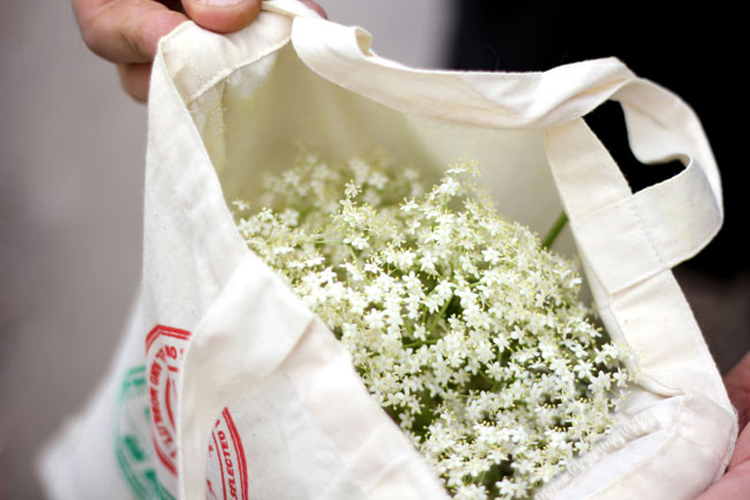 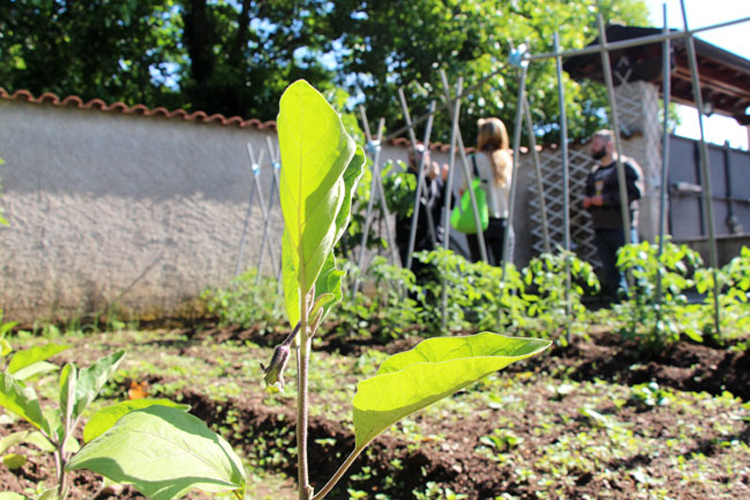 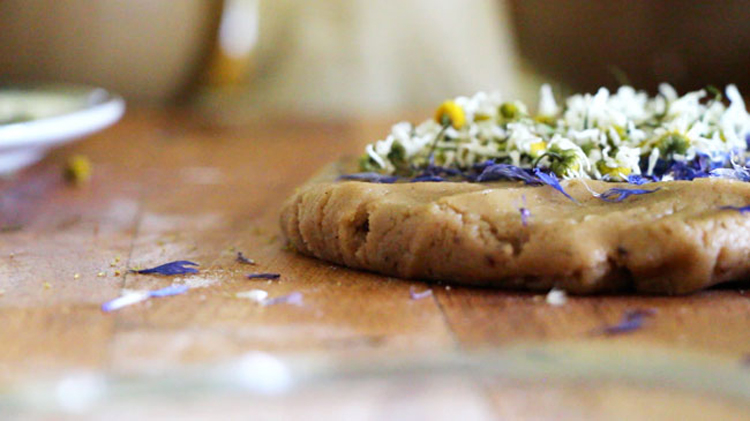 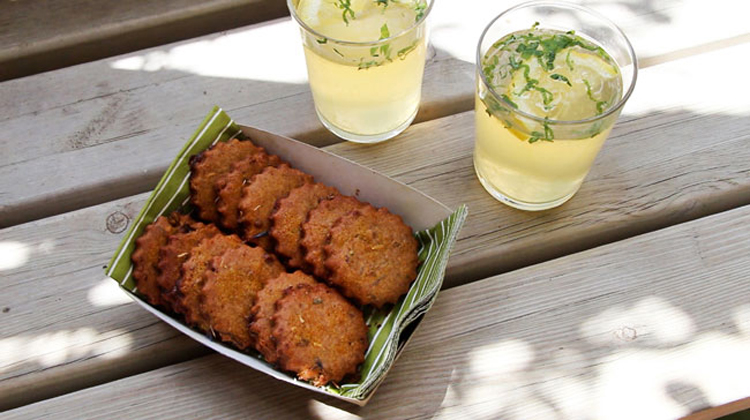 A lifestyle that combines personal freedom and respect for others. You have to give yourself enough time to listen to yourself, feel, understand, love yourself and realise what you really want.

I think that whether something is good, bad, healthy or unhealthy really depends on the person. If you’re consistent, purposeful and critical, you’ll be healthy even if, from time to time, you drink a bit, eat some crisps or smoke a cigarette. In short, you have to take care of your body and not live in a cage; living in a cage isn’t a healthy lifestyle.

Yes, I have a lot of contact. The day I publish a recipe –usually the day after I’ve cooked it–I “play” with it the whole morning. Around 10, I upload a photo with the ingredients to Facebook and then everyone tries to guess what I’ll be cooking; the debate that goes on is really interesting. Later, at 11 on the dot I publish the recipe on the blog and put the link on Facebook. Then I deal with questions about ingredients from the readers, both those who are starting to cook it at that very moment and those who are working who want to make it in the evening. So every day I have to publish something. It’s a game, a really fun and exciting exchange of information.

My workshops are usually for 8 or 12 people, and there is no teacher figure, we are all at the same level; I just get things going as the objective is to share knowledge.

It’s a chance to get a bit of guidance for vegan cooking, not from a chef, but from a person who investigates and who wants to share his experiences; it’s also a way of getting to know people with the same interests, which is really important too. People end up making friends at every workshop, something which gives me a lot of satisfaction. 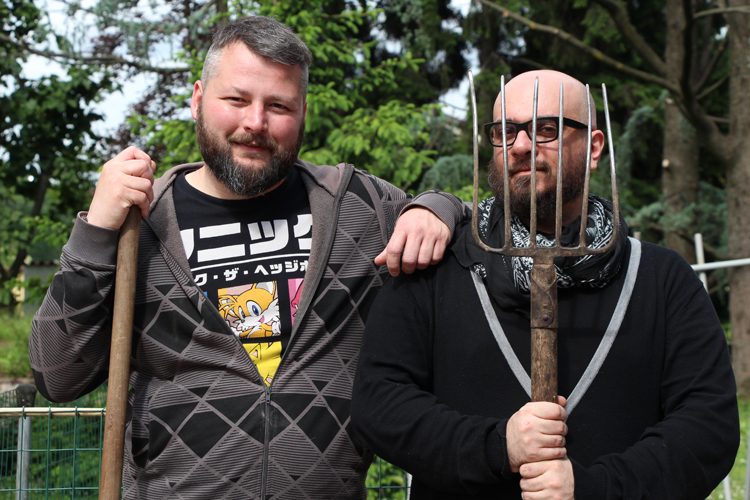 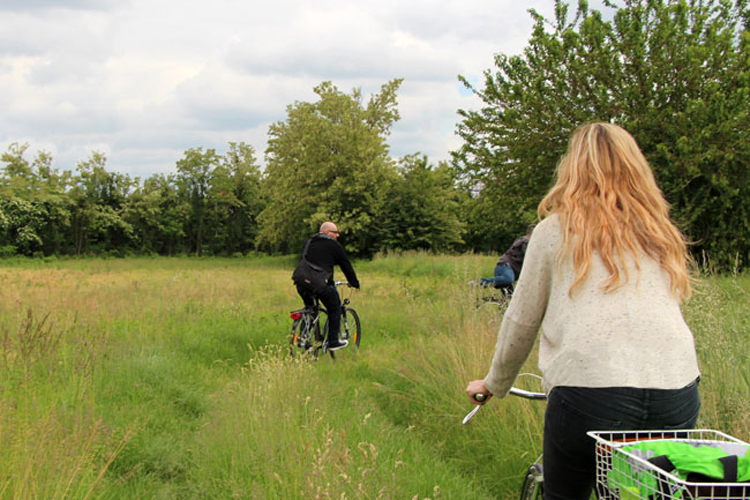 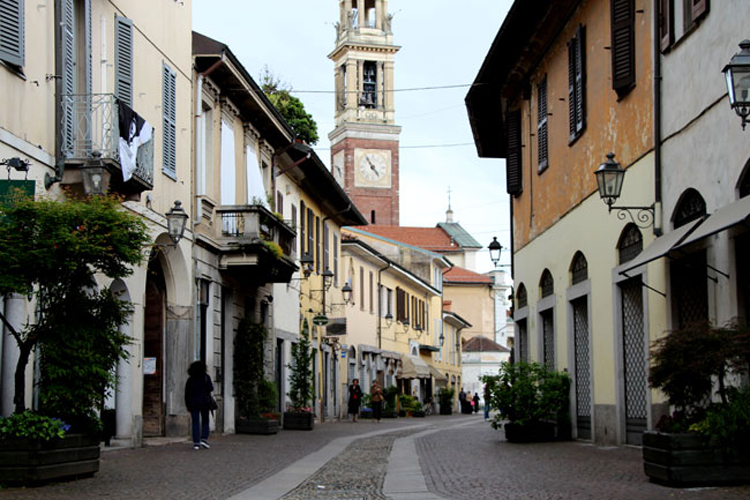 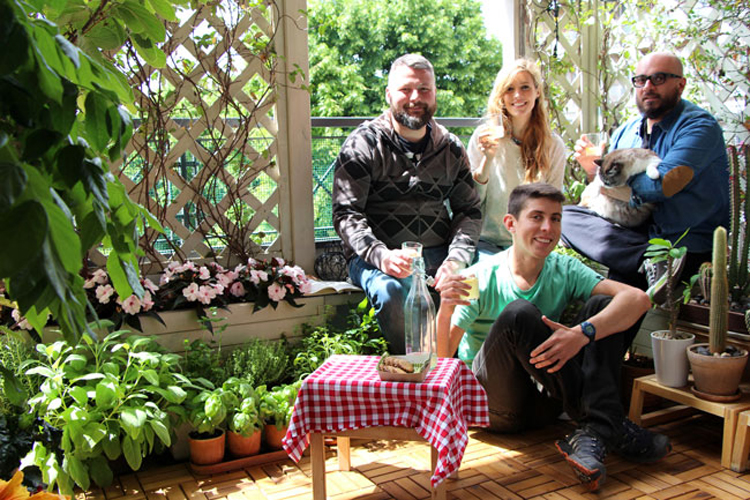 Even though you can find produce easily and lots of it, the debate is open; there are many sceptics who say that organic produce doesn’t exist as the land is very segmented and all crops are in contact with each other, so everything is contaminated. However, personally, the debate is more about industrialisation and the hyper-processing of food of the past 50 years. Too many foods are available now, and they’re too cheap; if we don’t think about what we’re buying, we are destroying our culture and identity as people. If you buy German mozzarella because it’s cheaper, we Italians are losing our identity.

We are really very lucky as in Italy at the moment, organic food is easily available and it is affordable. It’s usually expensive in large cities, but you can even find it in large supermarkets. In any case, it’s much better in towns like mine, as the farmer market usually always has an organic seller, or more than one –it’s cheap to sell there–, offering varied produce and it’s excellent. And that’s not the only option as there are also the local GAS (Gruppo Acquisto Solidale), which are basically purchasing groups that contact the producer directly to get good prices. The truth is there’s something for everyone.

Yes, of course! I like to make vegan versions of traditional recipes. From seitan roasts instead of pork or chicken, a very obvious interpretation, to fresh pasta such as ravioli, tortellini, tagliatelle, which end up being indistinguishable from the original version. I use natural ingredients to dye them, such as seaweed to make black pasta, tomato for red pasta, green leaves for green pasta or turmeric for traditional pasta.

Lombardy is the land of the cabbage, we have lots of different kinds: cavolocappuccio, cavoloverzia, cavolorappa (kohlrabi)…

A very traditional recipe is cassoeula, cabbage stuffed with verzini (small seitan sausages in my case) and polenta.

A very Christmassy recipe is cappelletti in brodo, small pasta “heads” with vegetable stock, or seitan roll with Jerusalem artichokes. 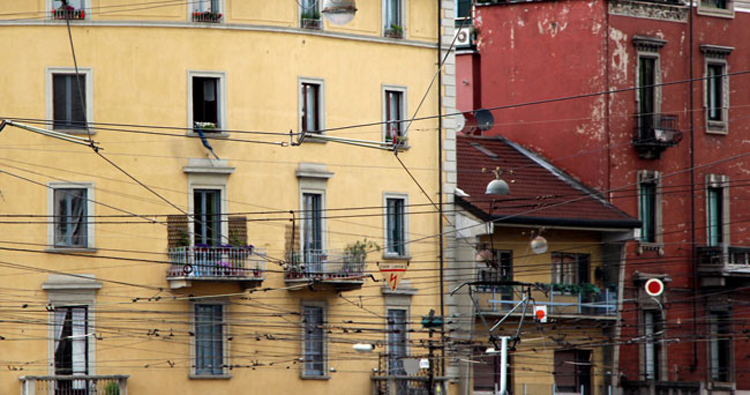 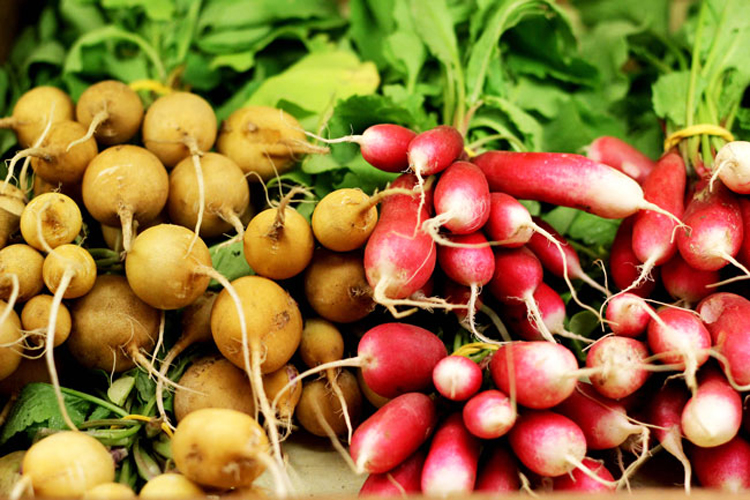 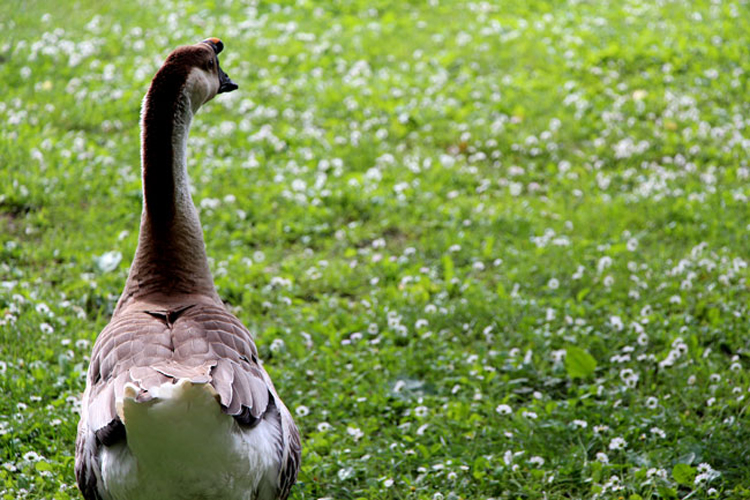 Ignorance. We are used to eating without asking where it comes from, how it has been made, how long it has travelled, how much water or energy has been used to make it… In short, how much damage has been done to the world to bring it to your table. I think we need much more information about what we eat. 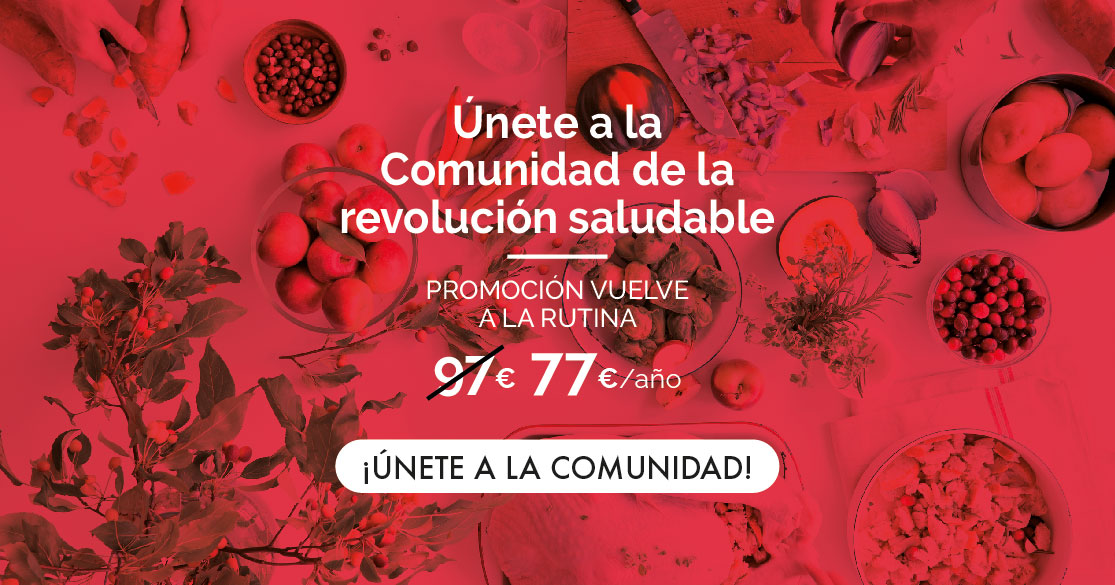